We have 82 guests and 2 members online

The president’s son-in-law has spent his life failing upwards. Now his position of authority on the Covid-19 task force poses a serious threat to the world

Natalie Portman once described Jared Kushner – a former classmate of hers at Harvard – as “a supervillain”. This seems unwarranted: while the president’s son-in-law is certainly a joker, he lacks the charisma needed for supervillain status. Indeed, the man lacks any charisma whatsoever; he has the presence of a piece of plywood.

In many ways, Kushner’s wooden demeanour has been his greatest strength: it has helped him fly under the radar. Politics has become a reality TV show and quiet Kushner is often too boring to bother with; it is far more interesting to focus on his glamorous wife, Ivanka Trump, or his garrulous father-in-law. Yet over the past few years Kushner has managed to insert himself into the highest levels of decision-making while largely remaining behind the scenes.

That changed last week. On Thursday, Kushner, who has taken on vast responsibilities in the Trump administration’s response to Covid-19, made his first public appearance at the White House daily coronavirus briefing. His moment in the spotlight seemed to serve as a wakeup call for the US. All of a sudden, it was glaringly obvious how dangerous Kushner’s hubris is. “I for one became even more fearful of [Covid-19] when I saw how inept” Kushner is, said the Republican pundit Meghan McCain on Monday. 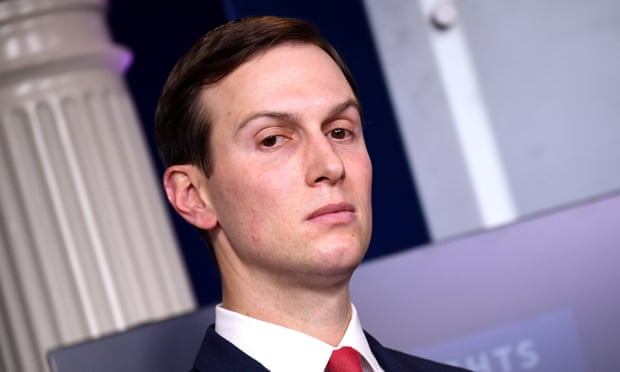 McCain’s fears were widely shared. Kushner was supposedly at the press briefing to explain the work he has been doing. However, despite him repeating the word '“data” 13 times, it quickly became clear that he has no idea what he is doing. He doesn’t even seem to know what the purpose of a federal stockpile of medical equipment is. “It’s supposed to be our stockpile,” he explained haughtily to reporters. “It’s not supposed to be states’ stockpiles that they then use.”

Kushner’s bizarre statement stunned people. Who did the guy think that the federal stockpile belongs to if not the United States of America? The first family and their friends? Kushner may as well have stood up there and said: “We’re not in this together – you’re on your own.” An opinion column in the New York Times the following day declared: Jared Kushner Is Going to Get Us All Killed. (The headline was later changed, for reasons unknown, to Putting Jared Kushner In Charge Is Utter Madness.)

During his 39 years on Earth, Kushner has continuously failed upwards. Despite being an unremarkable student, he got a place at Harvard; according to spokespeople for Kushner Companies, this was unrelated to his dad giving $2.5m to the university. After buying a skyscraper at the very top of the real estate market, Kushner was miraculously bailed out by a company with links to the government of Qatar – just months before a potentially ruinous $1.4bn mortgage was due.

Wherever Kushner is, questionable deals, questionable ethics and a crowd of yes men seem to follow. The world is constantly remade to reflect the reality that he wants to see. Indeed, shortly after the backlash to Kushner’s comments about the federal stockpile, the government’s website appeared to change to more closely reflect Kushner’s assertions. According to a spokesperson, this change had been in the works for ages; it was nothing to do with Kushner’s ego.

There is a management concept called the Peter principle. The world is full of inept managers, this theory postulates, because people are promoted until they rise to “their level of incompetence”. Bearing that in mind, let me introduce the Kushner corollary: the idea that a handful of mediocre middle managers, through a combination of privilege and luck, manage to rise way beyond their level of incompetence to a point where their hubris poses a serious threat to the world. It is becoming increasingly clear that Kushner is not just a doofus – he is dangerous.Arwa Mahdawi is a Guardian columnist