We have 58 guests and no members online

A statement the White House released from first lady Melania Trump has sparked swift backlash after she painted herself as a victim of “unwarranted personal attacks” in the wake of the deadly riots at the Capitol in support of her husband.

The first lady said she was “disappointed and disheartened with what happened last week” — seemingly referring to the pro-Trump mob, which threatened to kill the heads of government while clashing with police officers and ransacking the halls and offices of Congress as it convened to certify the 2020 presidential elections.

She then added: “I find it shameful that surrounding these tragic events there has been salacious gossip, unwarranted personal attacks, and false misleading accusations on me — from people who are looking to be relevant and have an agenda.”

She was likely referring to an Op-Ed published by Stephanie Winston Wolkoff in the Daily Beast. The former aide to Ms Trump called the violence at the Capitol last week “shocking, awful, disheartening and shameful” — a rare rebuke from a former loyal adviser to the first lady.

But at a moment when the nation’s government appeared to have just narrowly avoided an insurrection, it seemed the last thing anyone wanted to discuss was the first lady’s personal grievances about her former friend and aide. 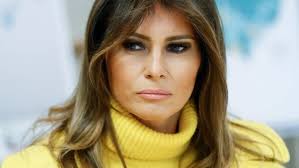 Quite an official statement from First Lady Melania Trump - typos, deceased rioters’ names listed in the same sentence as Sicknick’s and listed first, complaints about how she is being treated... https://t.co/3XkQgFFJAb pic.twitter.com/C2YI3lvCVL

Five people died in a domestic terror attack on our own republic last week incited by her husband but Melania Trump is the victim in this?! Every morning I think I can’t get more disgusted....

It quite a feat to twist the events of last week’s horrific attack to make oneself the biggest victim. But somehow, Melania Trump found a way.

Melania Trump, who wore a jacket saying she "didn't care" to the border crisis, and who was overseeing a photo shoot of the rugs at the White House during her husband's coup, is now saying she "implore[s] people to stop the violence."

Reporters noted how the initial release of the statement featured typos and included the names of the four rioters who sparked the mob alongside that of United States Capitol Police officer Brian Sicknick, who died as a result of his injuries sustained in the attacks and Howard Liebengood, another officer who according to police.

Others pointed out the similarities in her statement from a speech she delivered during the Republican National Convention, in which the following line also appeared: “The common thread in all of these challenging situations is American’s unwavering resolve to help one another.”

Some conservatives decried the statement, including Meghan McCain, daughter of the late Senator John McCain (R—AZ), who wrote on Twitter: “Five people died in a domestic terror attack on our own republic last week incited by her husband but Melania Trump is the victim in this?! Every morning I think I can’t get more disgusted.”

The first lady also received flack from the other side of the political aisle.

MSNBC contributor Kimberly Atkins wrote in a tweet: “[It’s] quite a feat to twist the events of last week’s horrific attack to make oneself the biggest victim. But somehow, Melania Trump found a way.”

Some noted how Ms Trump wore a controversial jacket that read “I don’t care, do you?” as she visited children separated from their families under her husband’s administration at the US-Mexico border.

White House staffers have resigned in waves following the violent mobs, in which at least 14 police officers were injured, according to police.

Stephanie Grisham, the former White House press secretary and an aide to Ms Trump, resigned amid the violent protests, saying in a statement: “It has been an honor to serve the country in the White House. I am very proud to have been a part of Mrs. Trump's mission to help children everywhere, and proud of the many accomplishments of this Administration.”

The mob arrived to the Capitol following his speech, in which he continued to promote conspiracy theories of rampant voter fraud while urging his voters to march to Congress.

“Our Nation must heal in a civil manner. Make no mistake about it, I absolutely condemn the violence that has occurred on our Nation’s Capitol. Violence is never acceptable,” Ms Trump said in her statement. “It has been the honor of my lifetime to serve as your First Lady. I want to thank the millions of Americans who supported my husband and me over the past 4 years and shown the incredible impact of the American spirit. I am grateful to you all for letting me serve you on platforms which are dear to me.”