We have 63 guests and no members online

Hours before the pro-Trump mob breached security and stormed the building, Giuliani encouraged the president’s loyalists to fight the election results “by combat.” Five people, including a Capitol Police officer, died during the attempted insurrection.

In a statement Monday, the bar association said it has received “hundreds of complaints in recent months” about the former New York mayor and his failed bid to help Trump overturn his loss to Joe Biden.

“Mr. Giuliani’s words quite clearly were intended to encourage Trump supporters unhappy with the election’s outcome to take matters into their own hands,” a spokeswoman for the group, Susan DeSantis, said in the statement. “Their subsequent attack on the Capitol was nothing short of an attempted coup, intended to prevent the peaceful transition of power.” 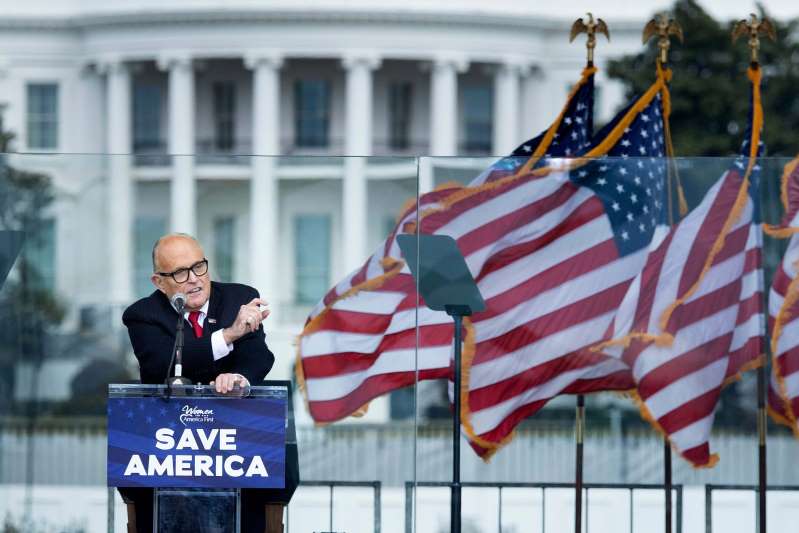 New York state Sen. Brad Hoylman, a Democrat who represents parts of Manhattan, filed a formal complaint to an appellate court related to “rampant and egregious violations of the Rules of Professional Conduct” and Giuliani’s “complicity” in inciting last week’s violence, he said in a statement.

Hoylman, who chairs the state Senate’s Judiciary Committee, argued that Giuliani’s advancement of election-related conspiracy theories “appears to have contributed to bloodshed in furtherance of the overthrow of our federal government.” Appellate courts in New York field and review complaints against lawyers that can lead to punitive action.

It’s unclear when the court may consider Hoylman’s complaint.

An attorney for Giuliani, who subsequently condemned the violence while maintaining that his voter-fraud claims are real, did not immediately respond to a request for comment.

Speaking to a charged crowd of thousands near the White House on Wednesday, Giuliani said: “If we’re wrong, we will be made fools of, but if we’re right, a lot of them will go to jail. So let’s have trial by combat!”

Trump, aided by Giuliani and other allies, has gone to extraordinary lengths to convince his supporters that Biden is not the election’s rightful winner because the contest was marred by widespread fraud. They have produced no viable evidence to support their claims, drawing resistance from elections officials in key battleground states and losing dozens of court cases.

A former Manhattan U.S. attorney before his largely heralded turn as mayor, Giuliani has been a member of the New York State Bar Association for at least a decade. The organization’s bylaws require that no member can advocate “the overthrow of the government,” according to the statement.

Giuliani will be given an opportunity to challenge his removal if the association elects to move forward, the organization said.