We have 220 guests and 2 members online

Every woman old enough to remember the 1970s recalls nights in the north of England during Peter Sutcliffe’s decade of terror.

“Leeds was really in a state of almost lockdown and women were afraid to go out,” remembered Mo Lea, who was a student in the city at the time.

By autumn 1980, when Lea was in her final year of an art degree, 12 women had been murdered in towns and cities across Yorkshire as well as over the Pennines in Manchester.

The police – waylaid for 18 months by a hoax and having only started to take the case seriously once “innocent young girls” (their words) and not just sex workers had been killed – had shifted the responsibility for public safety on to women themselves, urging them not to go out after dark.

But on 25 October, with her boyfriend away in London on a CND march, Lea decided she would not stay at home. She went to the pub to plan her 21st birthday party and after a few drinks walked through Leeds University’s Headingley campus to get her bus home. It was then she was approached by a man who called to her with such warmth that she assumed he must be a friend she couldn’t quite recognise.

Talking to Radio 4’s Woman’s Hour, Lea, now an artist, recalled the “nightmare terror” when she realised the man in fact posed her severe danger. 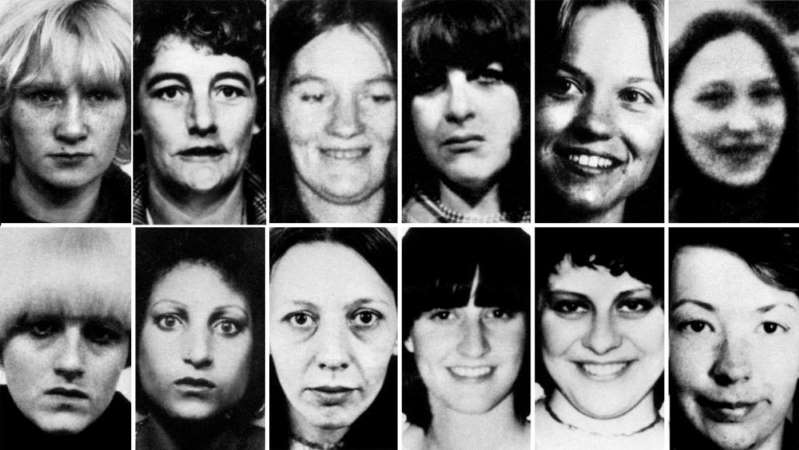 “I heard this massive whack on the top of my head and all I can remember is the pavement coming towards my face,” she said. In hospital, bloodied and bruised, the blame was immediately shifted on to her. “What have you done to deserve this?” she was asked.

Two months later, Peter Sutcliffe was arrested. Lea immediately recognised him, but the police didn’t want to know – perhaps “though embarrassment that another victim had arrived” she said. “I was ashamed. I was embarrassed. I felt guilty. I thought I had been stupid for walking in the wrong place. Part of me felt I deserved this because I had gone out on my own.”

The feminist campaigner Julie Bindel was 18 and living in Leeds when Sutcliffe killed his 13th and final victim there: Jacqueline Hill, a 20-year-old student, who was murdered three weeks after Lea was attacked.

Bindel lived less than a mile away from where Hill’s body was found and had been followed up the hill late one night the week before the murder by a man fitting Sutcliffe’s description. She reported it to the police, but they dismissed her.

She was involved in a group campaigning to end violence against women in Leeds and described how women felt under attack from all sides – not just by the Ripper, but by the blatant sexism from the press and West Yorkshire police.

“It was toxic,” she said. Headlines stated Sutcliffe made his “first mistake” after killing a 16-year-old walking home from school, Jayne MacDonald. The clear implication: that sex workers or women who had been drinking were fair game. She recalled how George Oldfield, who led the investigation, addressed the murderer on TV in 1979 saying: “There may be more pawns in this war before I catch you, but I will catch you.” That’s what women were to these detectives, said Bindel: disposable pawns.

Jim Hobson, a senior West Yorkshire detective, told a press conference that the killer “has made it clear that he hates prostitutes. Many people do. We, as a police force, will continue to arrest prostitutes. But the Ripper is now killing innocent girls.”

Joan Smith, then a young reporter working for Piccadilly Radio in Manchester, was one of the few women to cover the case. She recalls being mistaken for a sex worker at a press conference in Manchester, which took place straight after officers had invited local sex workers to listen to a tape recording made by a man who later turned out to be a hoaxer called John Humble.

“I turned up at Moss Side police station and I had a huge old tape recorder slung over my shoulder and a notebook and a pen in my hand … The head of the Ripper squad took one look at me and said: ‘Sorry dear, you’re too late. The pros’ press conference is over.’ I wasn’t offended but it showed the limits of his imagination,” she said.

The way police talked about the victims was appalling. One told Smith’s colleague that one of the women, who was also raped by Sutcliffe, had “a fanny as wet as a paper-hanger’s bucket”.

Police were so fixed in their view of the world and what a serial killer would look like that they missed numerous chances to catch Sutcliffe, said Smith: “One of the cops once said: ‘He doesn’t have to confess. The day we have him sitting across the table from us, we will know.’ But they visited him nine times and he never even made it into their top 10 lists of suspects.”

John Robins, the current chief constable of West Yorkshire police, has apologised for the “language, tone and terminology used by senior officers at the time in relation to Peter Sutcliffe’s victims” and said “it was as wrong then as it is now”.

The Yorkshire Ripper moniker, attached to the case by the media early on, hampered the investigation, said Smith. “Jack the Ripper is the prototype serial killer but we don’t know who he was, we don’t know what his motivation was, what kind of person he was and he’s this mythic figure. If you project this on to an ordinary bloke, I think they were expecting him to have horns or something.”

Police ignored Sutcliffe’s survivors, some of whom were clear their attacker had a Yorkshire accent – preferring to believe the fake claims of Humble, who sent letters with a Sunderland postmark and spoke with a Wearside twang.

Nina Lopez of the English Collective of Prostitutes helped organise protests outside the Old Bailey during Sutcliffe’s trial and can recall the fury women felt when the attorney general at the time, Sir Michael Havers, said of the victims: “Some were prostitutes, but perhaps the saddest part of the case is that some were not. The last six attacks were on totally respectable women.”

“We were so absolutely outraged because that was why it took them so long to arrest him,” she said. It was as though the police considered Sutcliffe was doing them a favour by killing prostitutes and “cleaning up the streets”, she claimed. “It was only when some so-called respectable women got killed that they started to pay attention. It really showed how when sex workers are not safe, no woman is safe.”

In Leeds today, Basis Yorkshire is a charity supporting sex workers who work the same streets Sutcliffe once prowled – some in the controversial “managed approach” zone in Holbeck, where prostitutes can work without fear of prosecution.

“The death of Peter Sutcliffe reminds us all of the stigma sex workers face and the lack of understanding of the reasons why women [do] sex work – often a lack of funds, women who felt that they had no other option than to sex work, even when the police was trying to stop them working; even when a killer was around,” said the charity in a statement. “In Leeds, sex workers do feel like they are able to report crimes committed against them, even though stigma means that sex workers are still at greater risk of violence.”

There are no innocent victims because there were no guilty victims.

Sutcliffe contributed to the creation and galvanisation of “a very vibrant women’s movement against violence”, said Bindel. “Because as soon as you pick up the rock and see the misogyny underneath you can’t unsee it.

Forty years on, not enough has changed, agrees Smith, who now chairs the Violence Against Women and Girls board. “Now we’re now in the situation where women’s organisations are having to take the CPS [Crown Prosecution Service] to court for not prosecuting rapists.”

Lopez notes it took the killing of three sex workers in Bradford in 2009 and 2010 before police caught Stephen Griffiths, dubbed the “crossbow cannibal killer” by the media. “The police have much better PR now, they’re much more careful in their language – but in terms of their attitude, their investigations, their priorities, they haven’t changed,” she said. “I think the messaging has changed. I don’t think the establishment has changed at all.”

Reference: The Guardian: Helen Pidd and Alexandra Topping  4 hrs ago
Prev Next