We have 57 guests and no members online

Vladimir Putin’s top diplomat claimed the US posed an existential threat to Russia through its support for Ukraine.

Sergei Lavrov, the Kremlin’s foreign minister who has a reputation for wild statements, used a press conference on Thursday to condemn Washington and Nato, while defending Russia’s bombing of Ukraine’s civil infrastructure.

He said the Kremlin’s assault on the Ukrainian power grid was aimed at cutting off the country’s supply of western arms, countering the view held by Kyiv and allies that knocking out heat and electricity for ordinary citizens was an attempt to break the national spirit.

His remarks came hours after Ukraine’s president Volodymyr Zelensky said around 6 million Ukrainians were facing winter without power due to a two-month long series of strikes on power plant, substations and transmission lines, among other key energy infrastructure.

On Wednesday night, the governor of Kherson said the region’s recently liberated capital city had lost power after heavy shelling from Russian forces.

The West has been feeding Ukraine weapons throughout the war, lately turning towards the supply of air defence systems to counter the Russian strikes which have rained on cities all over the country, far from the front lines of the war in the south and east.

Mr Lavrov claimed the arms shipments along with training of Ukrainian soldiers on western soil amounted to direct participation in the conflict by Nato, in particular the US.

He went on to charge that Kyiv was taking military orders from “Western masters”, a claim popular among Russian officials during the ten months since Mr Putin ordered the invasion. 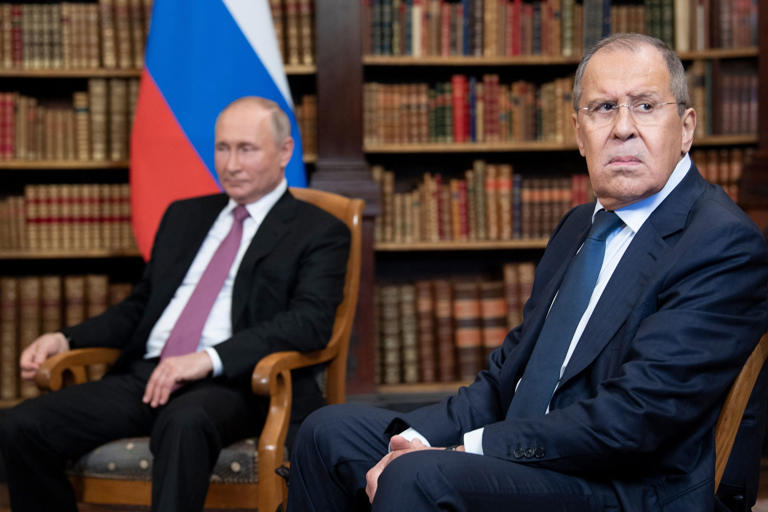 Lavrov, right, with Putin at a summit with the US in Geneva last year (AFP/Getty)© Provided by The Independent

Mr Lavrov said: “We attack energy facilities that make it possible for west to pump weapons into Ukraine.”

“So don’t say that the US and Nato are not participants in this war – you are directly participating. Including not only the supply of weapons, but also the training of personnel – you train the [Ukrainian] military on your territory.”

He added: “The vast majority of the targets struck by the Ukrainian Nazi battalion are determined by the Western masters of that regime.”

Though the minister devoted most of the conference to criticising the west, he insisted that Russia was open to the possibility of talks, both with Ukraine and the United States.

He said Russia had never walked away from contacts with the US but was yet to hear any “substantive ideas” from Washington, continuing Russia’s attempts to paint itself as being denied a chance at peace, despite being behind the invasion of Ukraine.