We have 64 guests and one member online

Liz Truss was met with a fierce political backlash from Conservative MPs after lifting the fracking ban, sparking anger from Tories worried that opposition parties will use the issue to win support in key battleground seats.

The government formally lifted a ban on drilling for shale gas in a bid to boost energy supply on Thursday, despite admitting that there had been no progress in assessing scientific risk and a need to “gather better data” on safety.

Business secretary Jacob Rees-Mogg said all sources of energy needed to be explored, insisting that a “higher degree of risk and disturbance appears to us to be in the national interest”.

Climate campaigners said the move would deepen fossil fuel dependence without bringing down energy bills, while Labour pounced on the U-turn on a Tory 2019 manifesto pledge – warning they would “hang this broken promise round their necks in every part of the country”.

But Tory MPs in so-called “red-wall” constituencies in the Midlands and north of England shared their anger over the government’s failure to clarify how communities would get a say, after Ms Truss promised drilling would only go ahead with local consent.

Mark Menzies, Tory MP for Fylde in Lancashire, told Mr Rees-Mogg there was “nothing luddite” about the safety concerns of his constituents. The Tory backbencher – visibly furious – demanded to know how local consent would be given if Ms Truss was to remain “a woman of her word”.

Mark Fletcher, the Tory MP for Bolsover, and Paul Maynard, representing Blackpool North, also demanded to more details on consent. Mr Fletcher said the current plans “don’t seem to wash”, adding: “It seems to come back to local communities being bought off rather than having a vote.”

Mr Rees-Mogg would not say whether residents would get to vote. Instead, he said that it would be up to companies to “develop packages that make the extraction of shale gas attractive” – suggesting they would have to offer financial compensation.

The business secretary said he has held talks with chancellor Kwasi Kwarteng about how firms would give money directly to people in areas where fracking is sanctioned.

“The last time we discussed fracking the idea was communities would be delighted if they got £10 for the village hall,” he said. I don’t think that’s the right way to do it – it needs to be direct to the individuals who are affected. I’ve had preliminary discussions with the chancellor, but I don’t have a formal thing to announce.”

Saying the government should not be pressing ahead without any new safety evidence, Sir Greg Knight, Tory MP for Derby North, said: “Is [Mr Rees-Mogg] aware that the safety of the public is not a currency which some of us choose to speculate in?”

The moratorium first imposed on fracking in 2019 came after the industry regulator said it was not possible to predict the magnitude of earthquakes it might trigger.

On Thursday, a government review of acceptable levels of seismic activity found that there was still only “limited understanding” of the risks – but ministers claimed that allowing more drilling would allow more data to be gathered.

Mr Rees-Mogg had suggested that higher levels of seismic activity would be allowed at drilling sites – telling the BBC that the current limit of 0.5 on the Richter scale was “too low”.

Speaking to reporters before leaving New York, Ms Truss defended the idea of breaching a Tory manifesto pledge not to lift England’s moratorium unless fracking was scientifically proven to be safe, claiming the energy crisis is the “number one issue we face”.

The government is yet to produce evidence showing hydraulic shale gas extraction is safe after the publication of the British Geological Survey on Thursday.

Environmental groups hit out at the government move to lift the ban. Greenpeace warned that drilling for more fossil fuels “will not lower bills, make us less dependent on volatile fossil fuel markets or cut our carbon emissions”.

Dr Doug Parr, Chief Scientist for Greenpeace UK, said it was clear the British Geological Survey showed that “there have been no significant breakthroughs in the science of prediction and management of earthquakes caused by fracking”.

Friends of the Earth campaigner Danny Gross said fracking was the most unpopular and least effective way of generating energy in the UK, and said any attempt to water down the licensing rules would “only fuel its unpopularity”.

Mr Gross said “ripping up the rules that protect people from fracking” will send “shockwaves” through many communities, adding: “This announcement suggests that the government is planning to throw communities under the bus by forcing them to accept ‘a higher degree of risk and disturbance’.”

Some 143 constituencies, including so-called “red wall” areas in northern England and the Midlands, have licences which could potentially allow firms to examine gas or oil exploitation. Recent analysis shows that there are licences for onshore hydrocarbon production in 94 Tory-held seats.

Labour’s shadow climate secretary Ed Miliband said fracking was a “dangerous fantasy”, claiming it would “do nothing to cut energy bills, costs more than renewables, and is unsafe”.

He told the Commons the Tories would have to explain their “charter for earthquakes” to voters in fracking areas. “We will hang this broken promise round their necks in every part of the country between now and the next general election.” 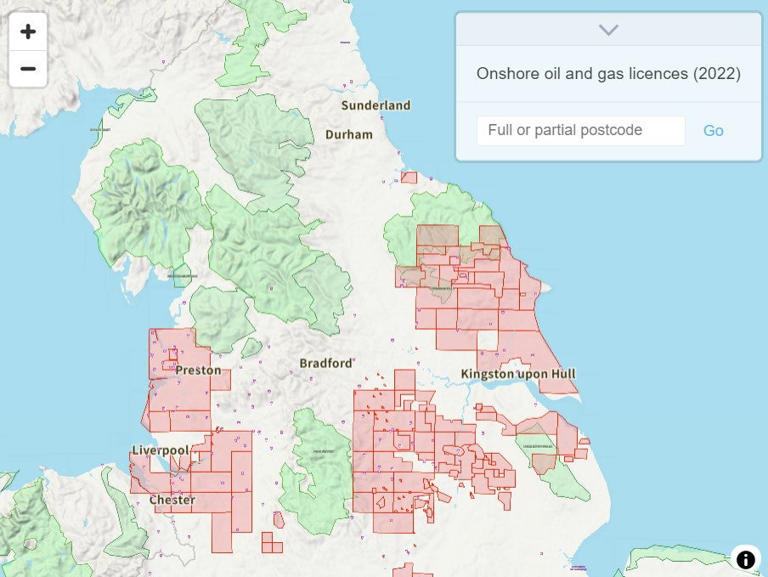 The Department for Business, Energy and Industrial Strategy (BEIS) said applications will be considered “where there is local support”, and developers will need to have the licences, permissions and consents in place before they can drill.

However, BEIS officials have reportedly been discussing moves to “push through” sites without local approval by classifying them as nationally significant infrastructure projects (NSIPs).

Tom Fyans of the countryside charity CPRE said both the environment and “the democratic right of the public to object to its destruction” would be at stake if the government pushed through permission without consent. “It also leaves the government’s net zero plans in tatters.”

The Liberal Democrats said the Tories were “treating people in rural areas like guinea pigs” when it came to the new push for fracking.

The party’s environment spokesperson Wera Hobhouse said: “The government’s own experts have refused to say fracking is safe. That they choose to plough on regardless shows a callous disregard for our communities and countryside.”

Green Party co-leader Adrian Ramsay condemned the government for choosing to “ignore warnings from its own advisers” and said fracking “will deepen our country’s dependence on fossil fuels” without bringing down fuel bills.

Mr Miliband also accused Mr Rees-Mogg of an “absolutely outrageous slur”, after the business secretary suggested opposition to fracking has been funded by Vladimir Putin.

The cabinet minister said “there have been stories widely reported that some of the opposition to fracking has been funded by Mr Putin’s regime” –comments later dismissed as “baseless allegations” by Friends of the Earth.

It comes as the government’s own polling published on Thursday showed that significantly more people oppose fracking than support it – 44 per cent of the public oppose shale gas drilling, compared to just 17 per cent who back it.

BEIS also announced plans for a new oil and gas licensing round, to be launched by the North Sea Transition Authority in October, expected to lead to more than 100 new licences for oil and gas exploration in the North Sea.

Top government adviser Lord Debden told The Independent earlier this week that there is no evidence that maximised fracking and North Sea extraction would have a meaningful impact on the international price of gas.