We have 17 guests and no members online

From The Simpsons to Aunt Jemima syrup, it seems brands and entities are taking notice, and changing things up to become more inclusive and promote the anti-racism message that the resurgence in the Black Lives Matter movement has shed a light on.But perhaps the most engrained of all such institutions getting a new reckoning is the national anthem.

"The Star-Spangled Banner" has been at the centre of the struggle against racism for some years, most notably when Black NFL player Colin began to take the knee during the singing of the anthem before football games back in 2016.At the time he drew widespread criticism from white people – including President Trump, who suggested in a tweet that he should be fired.

But now it seems people are reconsidering.Last week, protesters in San Francisco toppled a statue of the song's composer, Francis Scott Key.Key, who died in 1843, was slave owner who made some horrifyingly racist claims, saying that African Americans were an "inferior race of people, which all experience proves to be the greatest evil that afflicts a community".

Activist and author Kevin Powell says that it's time to address the racist history of the anthem that Americans grow up singing.For example, the original version contained the lines: "No refuge could save the hireling and slave/From the terror of flight or the gloom of the grave/And the star-spangled banner in triumph doth wave/O’er the land of the free and the home of the brave. 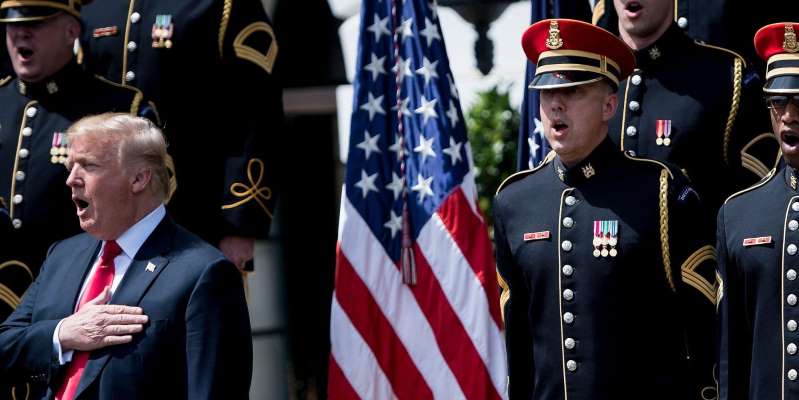 "Powell makes the point that: "How are you criticising a rap song for being violent, but when we get to kindergarten, we are literally teaching children violence through song? I said, ‘I can't participate anymore.’ So I stopped a long time ago.’”Historian Daniel E Walker agrees, and suggests it should be replaced with John Lennon's "Imagine".

He told Yahoo Entertainment:I do side with the people who say that we should rethink this as the national anthem, because this is about the deep-seated legacy of slavery and white supremacy in America, where we do things over and over and over again that are a slap in the face of people of colour and women.

He added that "Imagine" is "the most beautiful, unifying, all-people, all-backgrounds-together kind of song you could have”.

On Twitter, people suggested their own alternatives:all rise for our national anthem pic.twitter.com/9kHPnlt8Wp— joshua rush (@JoshuaRush)June 25, 2020change the national anthem to party in the usa send tweet—

Matthew Yglesias (@mattyglesias)June 25, 2020I have long favored America the Beautiful as our new national anthem. And only recordings of Ray Charles singing should be allowed.— Plastic Hair (@plastic_hair)June 25, 2020 But not everyone is into the idea.

Predictably, there were those who refused to accept that there is a real problem with having a song written by a racist as as national anthem.When “Imagine” is the National Anthem is when I move to Canada—

Rich Lowry (@RichLowry)June 26, 2020Now they want to cancel our National Anthem?😤😠😡— Ge🌸rge Wept (@GeorgeWept)June 25, 2020Just wait...they are gonna want to change the name of our country bc of who it's named after.—

Eric (@elay33)June 26, 2020 Lots of people said that racist or not, the current anthem is really not a great song and could do with a refresh.

While this really does miss the point, it's also hard to argue with.