We have 88 guests and no members online

The face of the Capitol rioter known as the “QAnon Shaman” has been revealed in a mugshot, as he is moved to a prison that serves organic food.

The mugshot of Jacob Anthony Chansley, 33, who is also known as Jake Angeli, was released on Thursday when he was moved from the DC Department of Corrections facility in Washington, DC, to Virginia's Alexandria Detention Centre.

He was arrested after he took part in the riots at the US Capitol on 6 January, alongside a mob of pro-Trump supporters. Prosecutors have alleged that he was one of the first to breach the building's security.

Five people died and several more were injured in the insurrection, while a week later, and a week before leaving office, President Donald Trump was impeached by the House for the second time for inciting the riots at a rally close to the Capitol. 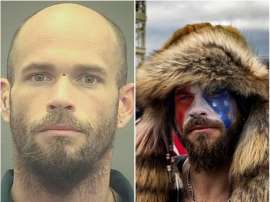 Mr Chansley, who calls himself the “QAnon Shaman”, made headlines following the riots, as he was pictured breaching the Capitol while topless, wearing a horned furry hat and sporting American flag-inspired face paint.

The image released on Thursday is the first time an unrecognisable Mr Chansley has been pictured since the events of that day.

He was moved to the facility in Virginia after his attorney argued that Mr Chansley had not eaten for nine days because organic food was not being served at his prison.

His lawyer, Albert Watkins, claimed that his client had lost 20lbs since being detained in Washington, DC, because eating non-organic food makes him physically ill and is against his beliefs.

Mr Watkins said that Mr Chansley considers eating organic food to be part of his “shamanic belief system and way of life”.

A judge then ordered the prison to serve the 33-year-old organic food, but because they could not comply, he was moved to the Alexandria Detention Centre, as they were “able and willing to accommodate (Chansley's) dietary requests”.

The judge said he granted the request because Mr Chansley’s diet is based on his religious beliefs, and said that his willingness to go nine days without eating shows conviction for it.

Mr Chansley’s lawyers have attempted to deflect blame for his actions at the Capitol on Mr Trump, and claimed their client acted peacefully during the insurrection.

He pleaded not guilty last Friday to charges of obstructing an official proceeding, violent entry, and disorderly conduct while on Capitol grounds.

Mr Watkins said his client would be willing to testify against Mr Trump, claiming that Mr Chansley felt "duped" by the former president's false claims of widespread election fraud.