We have 123 guests and one member online

Speaking for the first time since being jailed, Alexei Navalny, the Russian opposition leader, has vowed to fight the Kremlin despite intimidation after a judge ordered he stay behind bars for at least three more weeks.

The politician returned to Russia on Jan 17 for the first time since he was poisoned with Novichok and airlifted to Germany for treatment.

The Kremlin’s most formidable foe, who has been exposing official graft for over a decade, embarrassed authorities further in December by getting a Russian intelligence agent to confess to monitoring him before he was poisoned.

Mr Navalny, 44, was detained on arrival and arrested for 30 days last Monday for violating the terms of his suspended sentence.

In his first public appearance since he was taken into custody, Mr Navalny was shown on a television at a Moscow regional court on Thursday.

The court was considering an appeal against his arrest, which triggered major nationwide protests last weekend.

The court hearing came the day after Russian police conducted a series of simultaneous raids on Mr Navalny’s allies, searching a dozen of locations and breaking down the door to enter his wife’s flat.

Four people including Lyubov Sobol, one of Mr Navalny's key allies, were detained for 48 hours late on Wednesday. 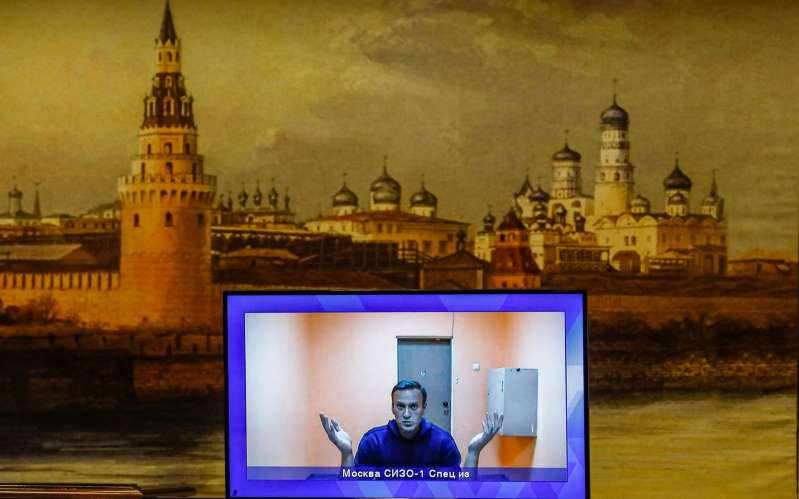 The detentions were part of a criminal probe into those who “created a threat of spreading infection” by organising Saturday’s rally in Moscow.

Speaking publicly for the first time in nearly two weeks, Mr Navalny, who was seen sitting on a chair in a bare room, expressed his “support for those who were arrested and faced other kinds of repressions just because they’re honest people and they’re not afraid.”

Mr Navalny, who was only recently told about massive rallies across Russia, thanked the protesters who took to the streets in over 120 towns and cities.

He said: “These people are the last barricade against those who are pushing our country towards complete degradation: You’re the defenders and patriots of our country!”

The opposition leader told the court that police and courts have been “demonstratively lawless” towards him. He claimed he was intimidated personally, as were Russians who want to take to the streets.

As the judge upheld the previous ruling and ordered to keep him in custody, Mr Navalny said: “You can put one prison guard by my side and a second one by the other side and handcuff me but this is not going to last forever.”

A court hearing on Tuesday will rule whether to convert his three-and-a-half year suspended sentence into a prison term.

The Russian opposition has raised the stakes in its battle with the Kremlin by urging its supporters to gather on Sunday near the headquarters of the intelligence agency, the FSB.

Mr Navalny claims the agency was behind his attempted assassination in August last year.

Russian prosecutors have responded by issuing a warning against illegal gatherings.