We have 36 guests and no members online

EU citizens are being offered financial incentives to leave the UK, the Guardian has learned, months before the deadline to apply for settled status has passed.

From 1 January EU citizens have quietly been added to the government’s voluntary returns scheme where financial support is offered as an encouragement to return to their country of origin.

Payments can include flights and up to £2,000 resettlement money. The scheme is designed to help some migrants in the UK to leave voluntarily.

People working to help vulnerable EU citizens in the UK said the offer of money to return home contradicted the government’s claim that is was doing everything it could to encourage people to register for settled status. The deadline for Europeans living in the UK to apply for the EU Settlement Scheme (EUSS) is 30 June.

Benjamin Morgan, who runs the EU homeless rights project at the Public Interest Law Centre, said: “It is clear from our casework that some of the most vulnerable EU citizens are yet to resolve their status. Barriers to application and delays in Home Office decision-making remain significant factors.

“This mixed messaging around settled status on the one hand and voluntary returns on the other, seriously undermines the government’s claim that the rights of vulnerable Europeans will be protected after Brexit.” 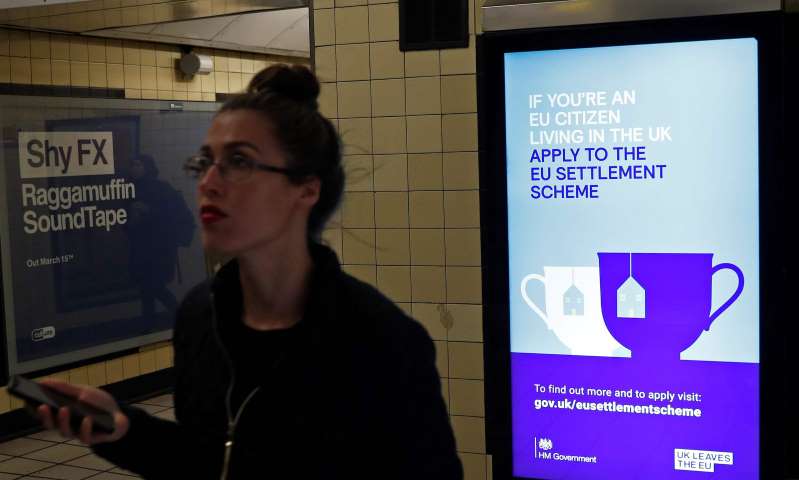 A Home Office spokesperson said: “Some people may choose not to obtain status under EUSS and may not wish to remain in the UK after the deadline. That is why we have written to stakeholders to inform them that EEA nationals who wish to leave the UK may now be eligible for support to help them do so under the voluntary returns scheme.”

The news came as research from the Joint Council for the Welfare of Immigrants (JWCI) warned that thousands of European key workers risked losing their legal right to remain in the UK.

The report, titled When the Clapping Stops: EU care workers after Brexit, warns that thousands of European citizens currently fulfilling key worker roles in the care sector as well as those working in construction, manufacturing and agriculture, are at risk of losing their legal status and face removal from the UK.

Of 295 care workers surveyed by the charity one in seven were unsure what EUSS was, one in three had not heard about it before being in touch with JCWI, and one in three did not know there was a deadline for the settlement scheme, nor when it was. Most of the surveys were conducted between January and March last year.

“If even a tiny fraction of the estimated EEA+ (EU, EEA and Swiss) residents are unable to apply in time tens of thousands will lose their status overnight,” the report states.

“Without urgent action the care sector is likely to be devastated,” it adds.

The report calls for the immediate lifting of the deadline for applying to the EUSS, for European citizens to be automatically granted settled status, and for an end to “hostile environment” policies.

It states that workers in industries with poor conditions, low pay and insecure contracts such as care, construction and agriculture are particularly at risk of slipping through the cracks in the scheme. Those unable to apply on time will be subject to measures including detention and removal and could be criminalised for working, renting accommodation or driving a car.

Chai Patel, of JCWI, said: “Our research scares me because the people we talked to were far less vulnerable than other groups hidden in exploitative working conditions, who no one has been able to reach to ask questions. Despite warnings from us and many other experts, the Home Office is burying its head in the sand about this just like they did with Windrush and making excuses instead of finding solutions.”

JCWI is not the only organisation to warn that some might slip through the net. The Migration Observatory has expressed concern that some groups are at risk of being unregistered by the 30 June deadline.

The immigration minister Kevin Foster said the JCWI report presented “an incredibly misleading picture of the EU settlement scheme” as it relied on “a small survey of less than 300 people conducted a year ago”.

“Since then millions of applications have been received by the scheme,” he said. “We have now had almost 4.9m applications to the hugely successful EU settlement scheme. There is now less than six months before the 30 June 2021 deadline and I would encourage all those eligible to apply now to secure their rights under UK law. A wide range of support is available online and over the telephone if you need it and we are funding 72 organisations across the UK to ensure no one gets left behind.”