Divers continue to search through mud and plane debris in a bid to find the Indonesian Sriwijaya Air jet’s cockpit voice recorder, which is key to learning why the plane nosedived into the water over the weekend.

Indonesian navy divers on Tuesday recovered the flight data recorder from the jet that disappeared on Saturday minutes after taking off from Jakarta with 62 people aboard.

The information on both black boxes will be key to the crash investigation.

The 26-year-old Boeing 737-500 had resumed commercial flights last month after almost nine months out of service because of flight cutbacks caused by the coronavirus pandemic.

The US Federal Aviation Administration (FAA) sent an airworthiness directive requiring operators of various Boeing 737 aircraft models, including the 737-500, to carry out engine checks before they can be flown again after being out of service.

The order followed reports of engines shutting down in mid-flight because of corrosion in a key valve. 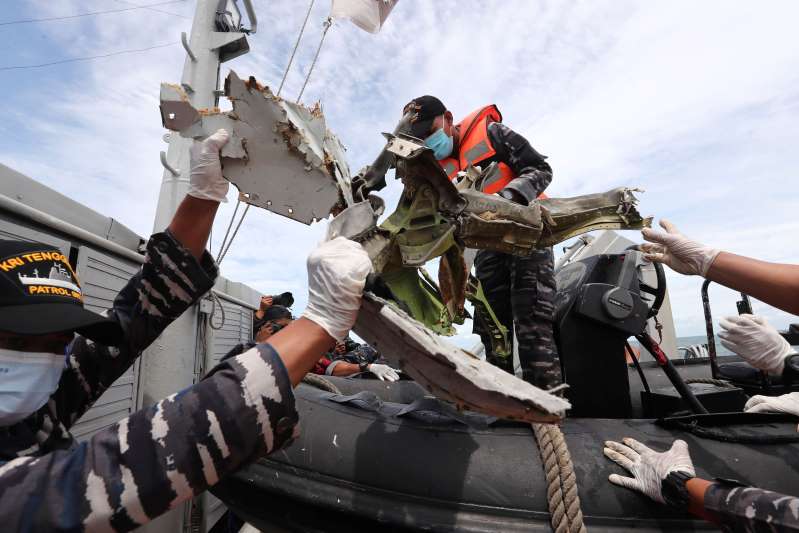 Director general of air transportation Novie Riyanto said the plane was inspected on December 2, including checks for engine corrosion, and was declared airworthy by Indonesia’s Transportation Ministry on December 14.

It resumed commercial flights on December 22, according to ministry data. After returning to service, the plane made 132 flights, including the last one, according to aviation-data firm Flightradar24.

Navy officials have said the two black boxes were buried in seabed mud under tons of sharp objects in the plane’s wreckage, slowing the search efforts.

A signal that may be from the cockpit voice recorder was detected near where the flight data recorder was recovered, between Lancang and Laki islands in the Thousand Island chain just north of Jakarta.

At least 160 divers were deployed on Wednesday to boost the search for the recorder that holds conversations between pilots.

More than 3,600 rescue personnel, 13 helicopters, 54 ships and 20 raft boats are searching in the area where the jet crashed and have found parts of the plane and human remains.

So far, the searchers have sent nearly 90 body bags containing human remains to police identification experts and anguished family members have been providing samples for DNA tests to the disaster victim identification unit, who on Tuesday said they had identified four victims.

The US National Transportation Safety Board (NTSB) said on Wednesday the team it is sending to join the crash investigation will arrive in a few days.