We have 51 guests and no members online

Boris Johnson was today urged to “take back control” of his infighting-plagued government by sacking Dominic Cummings.

Senior Tories warned the Prime Minister had  to get a “grip” after being left weakened by war in No10 in the middle of the second Covid wave and with weeks to clinch a Brexit trade deal.

After director of communications Lee Cain announced he was quitting after losing a power battle in Downing Street, pressure was growing  for Mr Johnson to axe his key but controversial top adviser Mr Cummings.

A senior Tory MP told the Standard: “If they have got rid of one of the Kray brothers, they have got to get rid of Cummings as well.

“To use a well-known phrase, Boris should  take back control and be the real Boris that so many of his genuine friends and supporters believe that he can be.”

Mr Cummings is seen as a radical and confrontational “disruptor” in Whitehall and Westminster, who has steered Mr Johnson away from his successful, collegiate leadership-style when he was mayor.

The internal battles in No10 exploded into the public after an inquiry was launched into the leaking of the plan for a second lockdown, which bounced Mr Johnson into announcing it earlier. 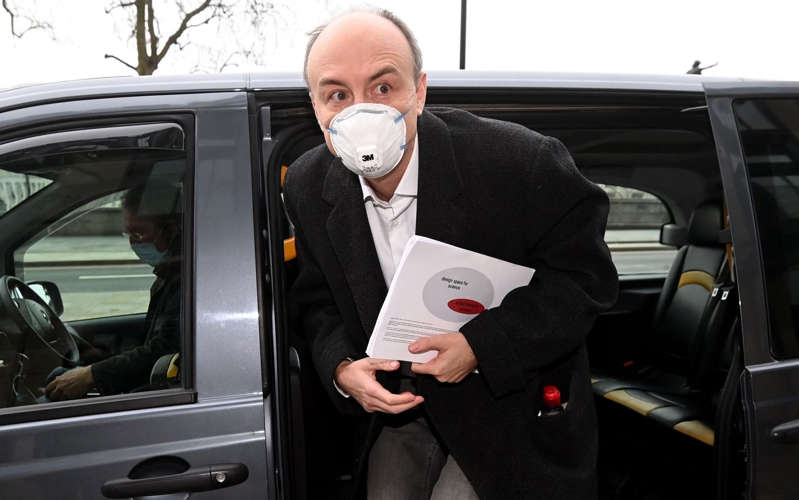 The Prime Minister was forced to act before more health data was available, which might have cast doubts on whether the new restrictions were needed.  Rumours have swirled around Westminster that Mr Cain, who was part of Mr Cummings’s Vote Leave team, had a role in the leak, which he strongly denies.

The leak came after it was discussed at a meeting of the “quad”, running the Government’s Covid-19 response, of Mr Johnson, Michael Gove, Rishi Sunak and Matt Hancock.

However, the inquiry is said to have looked into whether any advisers could have been involved, according to officials. Mr Johnson is said to have been moving to appoint Mr Cain as chief of staff but that this was opposed by the Prime Minister’s fiancée Carrie Symonds and Allegra Stratton, who is due to host Downing Street’s televised press conferences from January.

Amid the frenzy at Westminster, Mr Cummings was last night reported to have been considering following Mr Cain out of the No10 door, and the PM’s Europe adviser Lord Frost was even said to be thinking about his position. But both were believed this morning to be staying.

Senior MPs, though, are urging Mr Johnson to order a shake-up at the heart of the Government, given the colossal task of having to deal with the pandemic, Brexit, the integrated defence review, the spending review, and the COP26 climate change summit.

Tobias Ellwood, chairman of the Commons defence committee, said: “The bandwidth of government is clearly unable to cope. There is a strong desire to see an overhaul and expansion of the Whitehall machine to improve decision-making and competence.”

Sir Bob Neill, Conservative chairman of the Commons justice committee, told Talk Radio: “What is important is that, given that there are going to be certain changes by the look of it, we make sure that Boris’s team are people who work well with the parliamentary party.”

Amid the turmoil in Downing Street, he added: “This thing needs to be sorted out swiftly so that we can then get back on track.”

think, that the PM is taking back control of his government. He’s moving from a campaigning operation to an operation solely focused on good government.”

Sir Charles Walker, vice chairman of the 1922 Committee of backbench Conservative MPs, stressed aides needed to show loyalty to the Prime Minister. “There has been unhappiness about the No10 operation for some time,” he told BBC radio.

“The real opportunity here is for the chief of staff position to be filled by someone who has good links with the Conservative Party and its representation in the House of Commons.” Mr Cummings today remained tight-lipped over the Cain controversy after leaving his Islington home today.

He refused to answer reporters’ questions over whether he would consider resigning or whether the apparent fractures in relationships at Downing Street were damaging the Government’s pandemic response. Communities Secretary Robert Jenrick sought to argue that No10 was not being distracted by the infighting. He told BBC Breakfast: “The Prime Minister is surrounded by a good team, a strong team of advisers, and, of course, the Cabinet. Our sole focus in Government is trying to steer the country through the pandemic.”